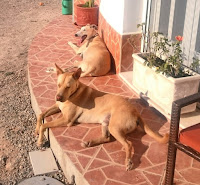 Actually, I always call them ‘our boys’, because they’re really a part of the family. They joined us after about three weeks in our new home. I’d been in touch with a dog home run by a Brit near Huercal Overa, and arranged to visit when we moved in. Sadly Peter died of cancer quite soon after we got the boys.


Anyway, they were the two dogs who greeted us at the gate at the dog home. They were alone in a fenced area, and I’m sure God had a hand in us choosing them both.

Rufus is a Galgo (a Spanish greyhound) at the back of the picture, and he’s very much my husband, Mike’s shadow. He follows him so close he steps on the back of his sandals. He lacked so much confidence at first, but he’d spent two and a half years in a poorly furnished dog home. He even bit Mike, but now he’s so different and sits and talks to you at times. Quite funny. We think he’s about seven now, but he’s found a delayed puppyhood and he loves running. Just ask a few cats who’ve ventured near.
Buzz, the Shar Pei cross came and sat on my feet at the dog home, and that was that. We took Rufus the first day, but went back for Buzz the next day. Since then he and I have had a special relationship. He was called Buster at the home and had been there a year and a half. He was taken by a family, but they returned him because he had too much energy. That must have been horrible for him, but I don’t think he regrets it now. Yes he has lots of energy, so Buzz is a good name, he also has a lot of garden to investigate and, we’re best buddies.

Despite the inevitable early problems, we managed through, and now they’re ‘our boys’. Spoilt to bits but who cares!
Being a healer, I’m really interested in alternative therapy and diets for dogs, and these two American websites have been a great source of information:  www.dogsnaturally.com ;  www.healthypets.mercola.com

A while ago, I got an easy and healthy Dog Biscuit Recipe online and our boys really enjoy them. I even make them for friends’ dogs at Christmas, so everyone gets a treat. Do try them for your pets.

Homemade Dog Biscuits
Ingredients
350 g Wholemeal Flour (sometimes I mix in spelt flour too)
½ cup (approx.) hot water and chicken stock cube dissolved, or meat juices + a little water.
1 Egg
¼ teaspoon salt
A few oat flakes/ little grated cheese/ chicken skin (cooked and whizzed into a mush in a processor)
Cooking Instructions
Mix everything together, adding more liquid if necessary. The result will be a heavy dough. Roll it out on a floured surface to about ½ inch thick (1.5 cm), and cut biscuits the size you want. I generally do some big ones, some medium and also some treat size. As I make a lot, I usually use a ruler as a guide and simply cut square and rectangular biscuits. If it’s a special occasion I use heart shaped cutters. At Christmas I made heart shaped biscuits as presents for all our neighbours’ dogs, eight in total. Mad but fun!
Once cut, put them a little apart on a greased baking tray, and if you do treat size put them on a separate tray as they will cook quicker.
Place in the top half of an oven at 200 degrees C for around 30 minutes until they’re really hard. Check the treats after about 20 minutes, but give the bigger biscuits 10 minutes longer.
When ready let the biscuits cool on a cooling tray. I’m sure your dogs will love them.

Email ThisBlogThis!Share to TwitterShare to FacebookShare to Pinterest
Labels: Relaxation 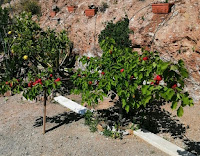